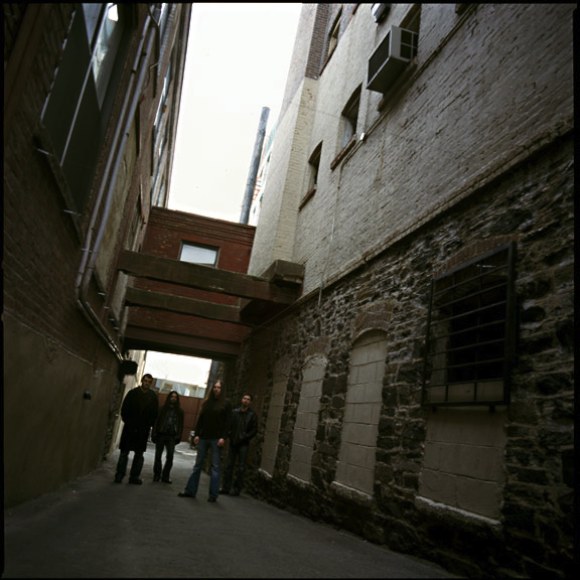 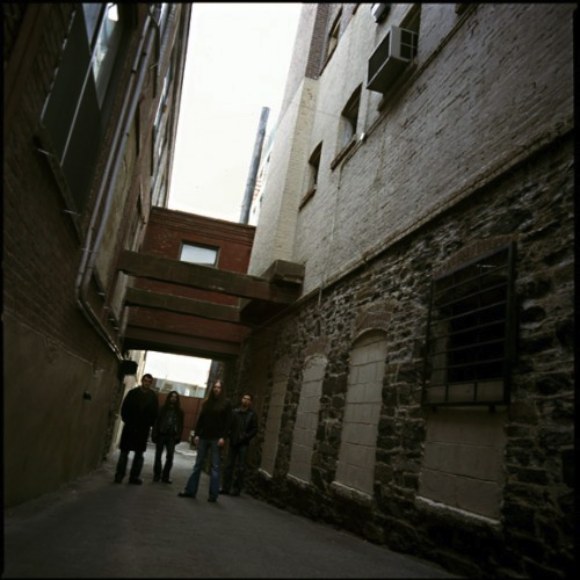 Named for a period of Mongol rule, New York City’s Khanate was not a band for few; they were a band for no one. Guitar snarled, spat, heaved and shrieked; horizon wide riffs revealed their selves only to contort into thorny scrabbles of feedback, broken harmonics, dog whistle whine. Drums stalked and plummeted and perforated; stabbing, clubbing, knocking craters into each song’s structure deep enough to fill with the pain that “vokill” troll Alan Dubin must carry with him. Whispers—words given in confidence; screams—declarations of the state of affairs; converse—talk taken into worm-infested graves and worn as a beard of bees. Bassist James Plotkin was an essential part of the Khanate ritual, turning nothing into something; realizing presence in empty rooms via boiling bass rattles, and laptop mad science.

“I wear a human shield—shh-shh.”

Dubin sometimes screamed so shrilly he went black; passing out from the power of his own breath. Plotkin blew four bass heads in one year; O’Malley plumbed the darkest depths of A minor, his strings nearly disconnected from their neck. Whatever heads drummer Tim Wyskida hammered have passed the terror test; that skin company’s practically got a goldmine of an endorsement ad waiting in the wings. Significantly, the gear fails to acquiesce most of the time, beaten into the void as a beachhead by tidal torrent.

Khanate’s sound was palpable textbook ratio; output over input realized in grievous amounts of gain that shook the gonads of Gaia itself. Gong, cymbals, toms; an aluminum necked Travis Bean; three vintage Sunn Model-T 120-150-watt heads; a cadre of 4X12 cabinets; an Ampeg SVT head; various reverb and delay units. Muscle, breath, electricity: Khanate allowed the basic elements of structure to separate. Extremes are more extreme when they number; aural anvils anesthetize. Physiology has no recourse but to react to sound of this stripe.

Things Viral, Khanate’s 2003 release, showed a different approach, more reactive – and interactive. Viral’s first track, “Commuted,” breaks down into call and response improvisation about three quarters of the way through: Dubin’s ribald vocals spin webbed Digitech strands; Wyskida flails his sticks like a blind swordsman. O’Malley patiently sits back, burning a slow fire. A rumbling floor tom fusillade finally seals the circle. And Plotkin’s bass drops like Goliath. Khanate refined their use of space on their first two records; they’d done everything they could do with it. Silence was practically eroticized; there was a ritualistic devotion to sonic absence. How effective it was: When sound did seize the air, it was fucking feral. With Khanate’s penultimate recording, Capture & Release, silence was cast aside; two long pieces provide point and counterpoint in a bestial din whose horror factor was increased tenfold with Dubin’s lyrics laid overtop; not a killer’s confessional, but the act itself.

The first track, “Capture,” cut clearly to the chase: Dubin’s voice rises. Even as he implores his object to “come closer,” the listener couldn’t be further from the prey; Dubin’s dwelling on commands occludes the object. Rheumy riffs flow unimpeded around Wyskida’s pounding percussion: snare presses take flight slowly, like big black buzzards indifferent to an automobile; they decide to pick at a blacktopped carcass one last time before slipping into the air. O’Malley and Plotkin work independently and as one, making good on Quantz’ assertion that A minor is most suitable for morose music. When the entire outfit comes together, “Capture” ensues its excruciatingly linear motion. Once the harmonic statement’s made, the pieces fall away, as Pathetique era Fushitsusha erected guitar totems only to tear them down. Wyskida is content with small flourishes; cymbal’d clatter that apes Tibetan rolmo – Buddhist brass reserved for ritual. “Capture” closes reluctantly, with a confusing storm of thundering low end and vocal squall.

“Release” takes its time coming up. Dubin finally lets the listener in on what’s taken place. As the first 18 minutes found one floating in appositional locutions, “Release” is “performative;” a world weaved from words. Making the utterance makes it the case:

Leaves soak
They drink
You are blood
That’s all

This isn’t description, this simply is. Whereas descriptive statements drench the intellect in addled adjectives, performatives are psychoactive pliers, pulling the will into unwanted exile; there are no blinders for the brain. Like A Clockwork Orange’s Alex, the eyes are forced to feast on the will’s inclination. Cracked open like clams, they rest unprotected; silty shells provide no solace from intent. O’Malley, Plotkin, and Wyskida paint purpose in heavy handed hue behind Dubin’s recitation. Layer after layer, the sounds issue. O’Malley’s guitar relaxes into a repetitive thematic; as Slint salted song with dynamic figures, O’Malley makes better on the process, walking slowly with Wyskida’s hi-hat clicks – spurs sounding from the boots of a dead man. Dubin screams: “You are blood! Nothing more!” This isn’t material reduction; this is fucking failed metempsychosis. Dubin’s narration is gleeful; the passing is utterly incomplete. Of course what better way to enunciate the failure than with a gong; Wyskida complies with a vegetal shimmer that rots over the last few seconds of the piece. Closure? No. But perhaps now with the ultimate offering, Clean Hands Go Foul.

Someone get me a motherfucking promo, please.